Andria Tupola will help raise our quality of life

According to the U.S Census Bureau, as of 2017, 13,537 people have left Hawaii for the mainland because of the dramatic changes to their living conditions. Our island home is slowly becoming a distant, unattainable dream. Each year that we wait, each time we settle for incompetency, we are losing precious hope in the future. State Rep. Andria Tupola is determined to make vital changes to the living conditions of the local people in Hawaii by focusing on housing, education and employment.

One of the biggest stories to come out of the upcoming midterm elections is the record number of women running for office: Almost 600 women, the highest number ever, threw their hat into the ring for the House of Representatives, the Senate, and governorships across the country, according to The Center for American Women and Politics (CAWP). Yes, women are on track to send more members of Congress to Washington than ever before.

Many of these women are mothers, eager to get other moms to vote. Their theory: Parents voting parents into office to represent the needs of families in Congress. “Moms know what it’s like to juggle childbirth, work, and career interests,” says Amy McGrath, who’s running for the House of Representatives in Kentucky. “These are health and economic issues that affect many people. We need a seat at the table, or at the very least need to be in the room.”

It was 18 days before the election and there was standing room only at the Happiness Planting Center, where state Rep. Tupola held a two-hour town hall meeting to talk story with Kauai residents.

“Our people are being forced off their lands and our children can’t afford to live here,” Ortiz said. “We need change.” State Rep. Andria Tupola, the Republican candidate for governor, talks with a supporter after a meet-and-greet session Friday at the University of Hawaii at Hilo. Tupola will meet with the Puna community at 5:30 p.m. today in the Pahoa High and Intermediate School cafeteria.

Andria Tupola: ‘I’m Going To Take Over This Government’

It’s her idea of fun. That, and running. Music, too. But the two-term House lawmaker hasn’t had much leisure time since she decided to try supercharging her political career. 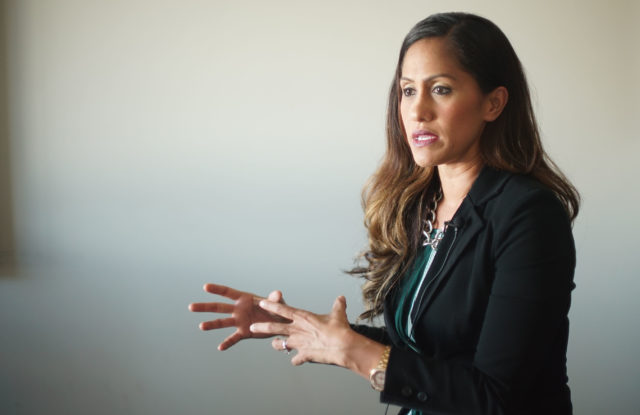 In Deep-Blue Politics of Hawaii, Andria Tupola Hopes to Spark a Red Wave

Running for governor of Hawaii means facing issues other candidates don’t—like having a state-supported charter school swallowed by lava. But for Andria Tupola, the challenges are even bigger: she’s running as a Republican.

Long before Donald Trump entered politics, America’s island paradise was largely a one-party state. Hawaii hasn’t elected a Republican to the US Senate since 1991 or to the House of Representatives since 2011. Democrats currently control the governor’s mansion, the secretary of state’s office, and both houses of the state legislature.

Ige faces criticism for passing on debates with GOP challenger

"That contrast must make Governor Ige uncomfortable because she connects with voters in a way that he's struggled with," Moore said.

Moore says it's shameful that Ige has only committed to one televised debate....

...It can be argued that Ige is not hiding, more like avoiding or ignoring or simply playing it safe. Playing it safe is usually a smart political strategy, especially if you’re the incumbent.... Ige would have much to lose in a series of debates with Tupola. Not the election — it’s hard to imagine a Republican wresting control of the state’s top office in this deeply blue state and in an era where the local party’s ranks in office has dwindled to almost nothing. 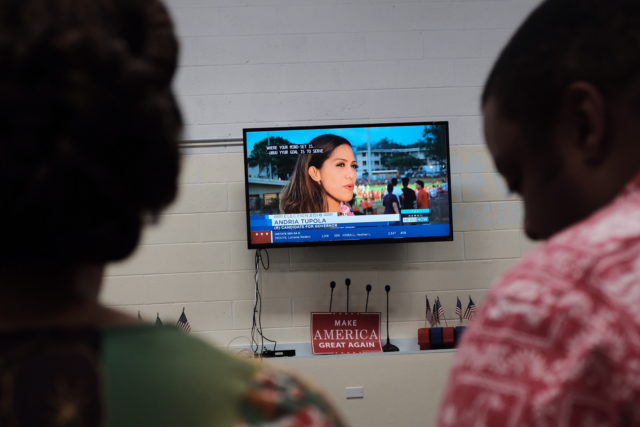 In partial results, Tupola had 52.6 percent of the votes, compared to Carroll’s 34.0 percent. Ray L’Heureux, a former assistant superintendent for the state Department of Education, trailed with 8.8 percent.

Tupola faces a monumental task in trying to upset the Democratic nominee. Gov. David Ige was leading Congresswoman Colleen Hanabusa on Saturday. Democrats dominate Hawaii politics, and there have only been two Republican governors in Hawaii since statehood.

Wailuku, Maui: “Ah she’s back from the dark side,” said my mostly staunchly Democratic friends, when I showed up for coffee with a first hand report on Andria Tupola’s July 25 visit to Maui.

Tupola is this year’s most unlikely candidate, and one of the few with a certain inexplicable and instantaneously recognizable star quality. She’s one of a handful Republican reps in the otherwise all Democratic state house and she’s given up her seat as minority leader representing the state’s poorest districts (House 43 in Waianae/ Nanakuli on Oahu) to run for governor.

Half Samoan, part Hawaiian, a definite maverick and now in a long long long shot trajectory to be Hawaii’s next governor, she is a breath of fresh air in an otherwise dull and dreary slog to November.